Deciding what is "canon". The "Bible" is NOT inerrant. It is a collection of books, largely chosen by cronies of the Roman Emperor and the corrupt Catholic Church 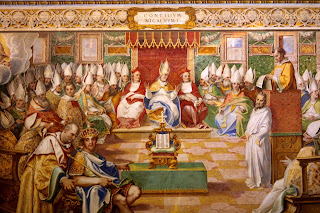 One of the most popular arguments of those who defend Saul of Tarsus is to claim that the book we call "The Bible" is "inerrant" -- not corrupted in any way, with every word being the 100% revealed word from the Most High.

But is that really true?  It is absolutely true that any words spoken by the Heavenly Father or Messiah are 100% truthful and inerrant.  The question, therefore, is whether all of the words recorded in the book we call "The Bible" actually came from the Most High.

First, one must recognize that there are many different "Bibles".  Roman Catholic and Protestant Bibles, for example, significantly differ from each other.  The Catholic Bible includes several "Apocryphal" books that Protestants have excluded - included the books of Judith and the Maccabees.  There are other "Apocryphal" book that have been rejected by both Catholics and Protestants -- including the First and Second books of Esdras, the book of Enoch, and many more.

Although there is disagreement among Christians as to exactly whom decided what books to be included in the book called "The Bible" (with some claiming it was decided upon at the First Council of Nicea in 325 AD, an assembly of supposed "bishops" gathered by Roman Emperor Constantine), it seems clear that the Roman Catholic Church was largely responsible.

Most seekers of truth today who are genuinely attempting to follow the Most High have discovered that the Roman Catholic Church is extremely corrupt, is heavily rooted in Babylonian and other occult doctrines and practices, and was actually a great work of Satan (part of "Mystery Bablyon the Great") to take over and corrupt the true message from the Messiah and Heavenly Father.

Man is fallible.  Given this, is it possible that the groups of men who decided upon the books to be included in "The Bible" made many other errors?  Or is it even possible that many were agents of the Enemy and knowingly have attempted to corrupt the true message by including books of false teachers?  Of course it is.  Not only likely, but very probable.

Crony bishops of the Roman Emperor and Catholic Church decided to include and exclude certain books in the 4th, 5th, and 6th centuries A.D.  And then the Protestants decided in the 16th and 17th centuries to exclude some of  books that the Catholics include.  Who is to say, then, that those of us living today do not have the authority to further judge and decide which books should be included or excluded?  Do we have any less authority than those who lived 300 years ago, or 1,500 years ago?

When you boil it all down, every individual on this planet must use their own intellectual ability and free will to judge for themselves whether a specific teacher or supposed "prophet" is true or not.  It would be great folly for anyone to blindly follow tradition, and the decisions of other men in these matters of great importance.

As I mentioned in another article on this website, the Most High states in Deuteronomy chapter 13 that he sends false prophets among the people of Israel as a "test", in order to find out whom among His people truly love Him.

Once we decide to utilize that judgement, and not blindly follow tradition, we discover that there is overwhelming evidence to conclude, without any doubt whatsoever, that Saul of Tarsus is a false prophet and false apostle.

And related to the writings of Saul/Paul and the New Testament exclusively, let me also add here that we must also carefully examine the books of Acts, the book of Luke, and the book of Mark.   Who were the men who wrote these books?  It is generally agreed that Luke wrote the book of Acts.  Who was Luke?  He was not one of the twelve apostles chosen by the Messiah.  He was actually a disciple and follower of Saul/Paul!  Luke accompanied Saul/Paul on his various journeys.  And Mark was not one of the twelve disciples either.  Knowing this, what authority is there for regarding the writings of Luke or Mark to be "inerrant canon scripture"?  There is none.  Having stated all that, however, this does not mean that everything that Luke or Mark wrote is false.  Most of it may be accurate and useful for historical reference.  But it should not be considered "divinely inspired".  Only to the extent that Luke or Mark may have accurately quoted the words of the Messiah would anything they wrote down be "divinely inspired".

Posted by SoldierofYah at 10:04 AM

Labels: Books that should be included in the Bible, Council of Nicea, What is Canon Scripture