Saul's physical appearance as recorded by his friend: short, bald, bow-legged, and a "hooked nose". Further confirmation that Saul was an Edomite-Canaanite "jew" 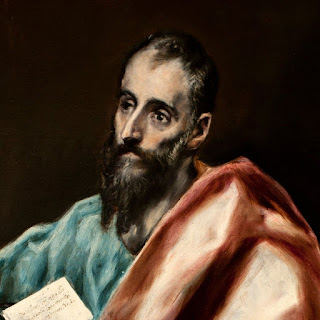 
The physical description of Saul/Paul, especially that of his "hooked" nose, is further confirmation of Paul's Edomite/Canaanite ancestry.   Saul claims to have been an Israelite of the tribe of Benjamin.  But he was a mongrel, who was also descended from the Edomites (Esau) and Canaanites -- as evidenced not only by his hooked nose, but also his admission (in Romans 16:11) that he is a "kinsman" of the Herodians (who are known and admitted to be non-Israelite descendants of the Edomites).

This source for the physical description of Saul is the Acts of Paul and Thecla, one of the New Testament apocryphal writings.  In this book, it is recorded that Onesiphorus (a friend of Saul/Paul who is mentioned in 2 Timothy 1:18 and 2 Timothy 4:19) describes the physical appearance of Saul/Paul as "a man small of stature, with a bald head and crooked legs, in a good state of body, with eyebrows meeting and nose somewhat hooked, full of friendliness; for now he appeared like a man, and now he had the face of an angel."

Note, again, how this description is meant to be a positive, and that it is given by one of Saul/Paul's friends.  But even it admits these undesirable physical traits -- giving even more weight to the accuracy of the description.

This "mainstream Christian" website (Christianity-today.com), which is pro-Paul, acknowledges that this is an accurate description of Saul's appearance:

He was a bald-headed, bowlegged short man with a big nose, and an unbroken eyebrow that lay across his forehead like a dead caterpillar.

It’s from the only physical description of Paul, in an early Christian document, the Acts of Paul. (Its author, a second-century church leader, was fired over the book because he attributed to Paul some unorthodox teachings such as sexual abstinence in marriage.)
A more literal translation of the description of Paul in Greek reads, “A man of middling size, and his hair was scanty, and his legs were a little crooked, and his knees were far apart; he had large eyes, and his eyebrows met, and his nose was somewhat long.”

This may be little more than imaginative writing from a century after Paul died, but it does not clash with the way Paul’s critics described him: “His letters are weighty and forceful, but in person he is unimpressive” (2 Cor. 10:10).