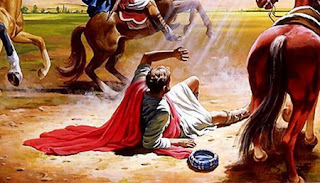 Saul on the road to Damascus.  Did this really even occur, as he claimed?


Saul/Paul claims to have been "converted" on the road to Damascus (on his way to arrest followers of the Messiah).  But there are problems with this claim. There are three separate accounts of this "conversion event" in the Book of Acts, and they all contradict each other, demonstrating that Saul is lying about it. Secondly, the Scripture says that "at the mouth of two witnesses, or at the mouth of three witnesses, shall the matter be established" (Deuteronomy 19:15 ), yet Saul never gives us the names of any witnesses to this "conversion event." Like his claim to "apostleship", we are left to take his word alone.

Acts 9:1-7 " And Saul, yet breathing out threatenings and slaughter against the disciples of the Lord, went unto the high priest, And desired of him letters to Damascus to the synagogues, that if he found any of this way, whether they were men or women, he might bring them bound unto Jerusalem. And as he journeyed, he came near Damascus: and suddenly there shined round about him a light from heaven: And he fell to the earth, and heard a voice saying unto him, Saul, Saul, why persecutest thou me? And he said, Who art thou, Lord? And the Lord said, I am Jesus whom thou persecutest: it is hard for thee to kick against the pricks. And he trembling and astonished said, Lord, what wilt thou have me to do? And the Lord said unto him, Arise, and go into the city, and it shall be told thee what thou must do. And the men which journeyed with him stood speechless, hearing a voice, but seeing no man."


Note in account above that the author of Acts (Luke, a companion of Paul) says that the men traveling with Saul stood there speechless, they heard the sound, but did not see anyone. Also note here that the voice only tells him to arise and go into the city and THERE it shall be told him what to do.

Acts 22:1-9 "Men, brethren, and fathers, hear ye my defence which I make now unto you. I am verily a man which am a Jew, born in Tarsus, a city in Cilicia, yet brought up in this city at the feet of Gamaliel, and taught according to the perfect manner of the law of the fathers, and was zealous toward God, as ye all are this day. And I persecuted this way unto the death, binding and delivering into prisons both men and women. As also the high priest doth bear me witness, and all the estate of the elders: from whom also I received letters unto the brethren, and went to Damascus, to bring them which were there bound unto Jerusalem, for to be punished. And it came to pass, that, as I made my journey, and was come nigh unto Damascus about noon, suddenly there shone from heaven a great light round about me. And I fell unto the ground, and heard a voice saying unto me, Saul, Saul, why persecutest thou me? And I answered, Who art thou, Lord? And he said unto me, I am Jesus of Nazareth, whom thou persecutest. And they that were with me saw indeed the light, and were afraid; but they heard not the voice of him that spake to me."


Note in account above that Saul/Paul says that the men traveling with Saul did NOT hear the sound, but saw a light, contradicting the account above from Acts, Chapter 9.

Acts 26:12-18 "Whereupon as I went to Damascus with authority and commission from the chief priests, At midday, O king, I saw in the way a light from heaven, above the brightness of the sun, shining round about me and them which journeyed with me. And when we were all fallen to the earth, I heard a voice speaking unto me, and saying in the Hebrew tongue, Saul, Saul, why persecutest thou me? it is hard for thee to kick against the pricks. And I said, Who art thou, Lord? And he said, I am Jesus whom thou persecutest. But rise, and stand upon thy feet: for I have appeared unto thee for this purpose, to make thee a minister and a witness both of these things which thou hast seen, and of those things in the which I will appear unto thee; Delivering thee from the people, and from the Gentiles, unto whom now I send thee, To open their eyes, and to turn them from darkness to light, and from the power of Satan unto God, that they may receive forgiveness of sins, and inheritance among them which are sanctified by faith that is in me."


In this account, Paul claims that the voice told him these things he was to do THERE ON THE ROAD. This is a clear departure from the other accounts of the event. The stories cannot be reconciled. At least one is not true.

- Deciding what is "canon". The "Bible" is NOT inerrant. It is a collection of books, largely chosen by cronies of the Roman Emperor and the corrupt Catholic Church
- Passage in 2 Peter purportedly supporting Paul's teachings must be fraudulent
- Pharisee Saul of Tarsus was not even one of the 12 true Apostles!! There are only 12 apostles, and no more!
- Summary proving Saul of Tarsus is a false apostle and teacher - Overview of Major Arguments Against Paul


Posted by SoldierofYah at 1:42 PM